Why Your Current Anti-Virus, Backup, and Firewall Have Been Rendered Completely USELESS (And What You Need to Do About It) 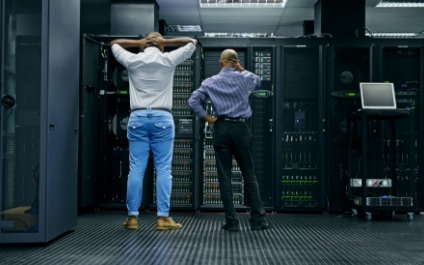 At the end of World War I, German engineer Arthur Scherbius constructed a device that would become central in another worldwide conflict of unimaginable magnitude over 20 years later: the Enigma machine. The machines, which steadily became more complex with each iteration, consisted of a series of rotors that, by themselves, encrypted messages input via the attached typewriter. Each rotor performed a simple substitution cipher, but when run through multiple rotors, the encryption reached a staggering level of complexity.

Initially used for transmitting sensitive company secrets in the commercial sector, the technology was eagerly adopted by the German military machine prior to World War II. After war broke out across Europe once again, Enigma encoding became central to the operation of the Axis powers, used for sending vital, sensitive intelligence across the airwaves. Due to the complexity of the Enigma system, the Germans were certain that the code would not, and could not, be broken.

But the Germans were wrong. Using photographs of stolen Enigma operating manuals obtained by a German spy, the Polish General Staff’s Cipher Bureau managed to construct an Enigma machine of their own, enabling them to covertly decrypt substantial amounts of Axis intercepts. Ahead of the impending invasion of Poland, the Poles shared their knowledge with the French and British military to expedite the defeat of the Germans. A massive team at Bletchley Park in Buckinghamshire, led by codebreaking master Alan Turing, became the central location for Allied efforts to keep up with Enigma operations.

Germany, still convinced the code was fundamentally unbreakable, continued using Enigma for a wide array of communications. But even the most complicated four-rotor Enigma systems were eventually decrypted. Great pains were taken to ensure the Germans never learned their precious code had been broken, labeling any intelligence gained from Enigma as “Ultra,” keeping the significance of Bletchley Park’s operations under wraps. Ultra-intelligence was used sparingly to avoid German suspicion.

The efforts of the Polish Cipher Bureau, Alan Turing, Bletchley Park, and the hundreds of men and women who contributed to the cracking of the Enigma code were described as “decisive” in the
shortening of the war, and, at the high end, are estimated to have saved over 14 million lives.

Much like the Germans who assumed Enigma was uncrackable, most business owners believe their current, potentially outdated, cybersecurity measures will keep their data safe. But, in the contemporary age where digital information is as precious as gold, cybercriminals are working around the clock to penetrate even the most robust security solutions. You can bet they’ve already created a workaround for your current anti-virus. What was good enough before may not be good enough today. After all, it’s simply impossible that a security solution from even two years back could be equipped to defend your precious data from a cutting-edge hacking technology that didn’t even exist when it was created.

Today, companies that fail to stay abreast of the latest cybersecurity trends — clinging foolishly to their own Enigma — are certain to pay the price down the line. Once the lock is picked, you need a new lock, and criminals are cracking new locks each and every day.

Luckily, as your IT provider, we’re cybersecurity experts, and we constantly seek the latest and most robust security solutions. Don’t leave your company’s security up to a false sense of confidence. Always be looking at options to upgrade your digital security and make it a sure thing.

If you need to get your employees working remote FAST and your phones answered, we have easy inexpensive ways to get this done for you. Fill in the form below and we’ll set up a free, no-obligation consultation to create a plan for you.